Today’s reading comes to you in the form of a video. Here is Tolkien reading Roads Go Ever On & On:

And now, the ‘inspired by Tolkien’ version of the same poem as featured in the LOTR: FOTR film:

I’ve been reacquainting myself with my piano lately, so I thought this was a fitting choice for today. And now I’m off to tickle the keys of my freshly-tuned piano! Hurrah!

How oft, when thou, my music, music play’st,
Upon that blessèd wood whose motion sounds
With thy sweet fingers when thou gently sway’st
The wiry concord that mine ear confounds,
Do I envy those jacks that nimble leap
To kiss the tender inward of thy hand,
Whilst my poor lips, which should that harvest reap,
At the wood’s boldness by thee blushing stand!
To be so tickled, they would change their state
And situation with those dancing chips
O’er whom thy fingers walk with gentle gait,
Making dead wood more blest than living lips.
Since saucy jacks so happy are in this,
Give them thy fingers, me thy lips to kiss.

That’s so epic! People say that all the time, and it never ceases to annoy me. Everything nowadays is epic:

“That joke was epic.”

“The pizza was epic.”

“Did you see her outfit? Totally epic.”

Or my personal favorite: “Epic fail!” Gah. C’mon, people. What does that even mean?!

Poor word. It once held so much power, but due to people’s obsessive use of the term, “epic” has lost its luster. But every once in a while, something—a photograph, a larger than life book or movie, a painting, a sunrise…you get the idea—comes along and you find that the only sufficient way to describe this thing is to use a word like epic. And, naturally, when used in the correct context, the word receives a new sense of identity. It suddenly–OMG–makes sense again! (Who would’ve thought?)

I feel this way whenever I listen to E.S. Posthumus’s brilliant masterpiece, “Nara.” (You might recognize it as the theme song for CBS’s Cold Case.) Seriously, here is a song that absolutely deserves the label “epic.” Because it truly is. Excellent form and instrumentation, beautiful melodies and chord progressions, and rich percussion work that is somewhat complex at times, but never overbearing. It’s a song that simultaneously captures and releases one’s imagination.

I’ve always been a firm believer that music, when created carefully and thoughtfully, has the ability to bring its listeners to a point of complete catharsis, and this song certainly does that for me (and for many others, I’m sure). Thus, I can safely say that “Nara” is epic. In every sense of the word.

Sometimes, when my own words fail, a song successfully says it all. Nani, I miss you–more and more each day. The holidays just aren’t the same without you.

…and for the lovely boys of PAX217, that was the word of the day yesterday. That’s right, folks! The band is seriously considering a reunion (or at least a reunion show of some sort). I don’t know any of the details, but according to the band’s facebook page (which is a very active and vibrant place, despite the band’s musical inactivity for the last few years), the boys all hung out last night – the first time they’d all done so in approximately five years! 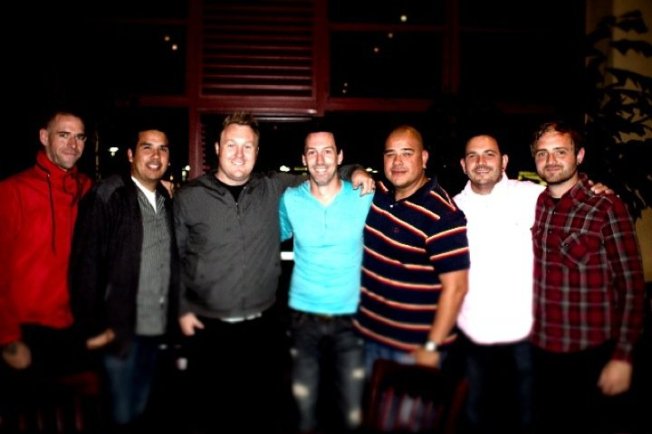 And by the end of the evening, this was the band’s status message:

“ALL HANDS ON DECK. PAX217 will be playing music together again. How much and exactly when to be announced. WE LOVE YOU ALL.”

[Credit to the PAX217 facebook page (and most likely Dave’s super rad camera) for the pictures.]

And while I’m here, I may as well post this video. Ya’ll know the *cough*terrible*cough* song “Fireflies” by Owl City? Well, Josh Auer (the bassist) made this a while back, and I thought it was hilariously brilliant:

P.S. Remember my “nostalgia” blog post and my comment about how I’m still mourning over the band’s break up? Well, mourn no more! It’s WORLD DOMINATION time! Better find my band shirt, hat, and wristbands. I have a feeling I’ll need those in the not-so-distant future. :D

My brother showed me this rendition of “Apologize” about a month ago, and I’ve seriously become obsessed with it. And I personally think that this version of the song is better than the original. Especially the instrumental bridge – brilliant! I had to share:

1. Matt and the gang performing “Vivian.” I love this song; it really shows Matt’s softer, more poetic side:

2. A more mellow rendition of “Children” (featuring Matt on the banjo!):

I just purchased Landon Pigg’s The Boy Who Never, and I’m seriously in love! =)

…a virtue that I possess not, lol. I suppose I’m sometimes patient, but when it comes to things like waiting for my favorite band to release their new album (the one they’ve been talking about for months) … not so much.

This is for all you Delta Spirit fans who, like me, are probably growing a bit restless as you wait for the boys to release their much-anticipated album, History From Below. May seems so far away! But in the meantime, let’s keep rockin’ out to Delta’s old tunes.

Here’s a song that I’ve always loved, but for whatever reason, it didn’t make the cut for Ode to Sunshine (or maybe it hadn’t been written when they released that album). At any rate, I really hope it made the cut for the new record.